Who We Are Our Team Why Us Careers

All about Margin and Peak Margin

Let's start from the basics, right from understanding the terms.

Margin is the Up-front amount required to be maintained by a client before he takes a position. This Margin is decided by the Exchange and differs from Segment to segment. Let’s see the broad framework in which this operates for different segments

Note: At Tradeplus, we collect a minimum of 20% of Traded Value only for Intra day trades in Equity segment. It differs for Delivery based trades

What is Peak Margin?

Now we know what is Margin. Let us go to the next step to understand what Peak Margin is. It is nothing but the highest Margin required by a client on any given day. To determine the highest margin, the Clearing Corporation randomly takes minimum 4 snapshots of the margin required on a given day. The highest of the 4 snapshots is the peak margin which the client should have maintained during the day.

Let’s see it with an example

Image you have bought a Nifty 17350 in the morning with a balance of 1.5 lakh in your account. As mentioned above, the Clearing Corporation will randomly take minimum 4 snapshots of the margin required for the position during the day and the margin requirements in all these 4 snapshots could vary as given below. 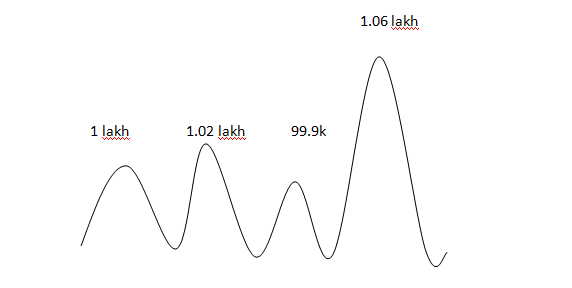 The highest or the peak of all the 4 snapshots is 1.06 lakhs and that is the Peak Margin Requirement.

What is the difference between Peak Margin and End of Day or EOD Margin?

Peak Margin is the highest margin required on a given day. End of Day margin is the margin prescribed by Exchange at the end of Trading day.

Why was I debited with Margin Penalty?

Whenever the margin available with you exceeds the margin required as per the Exchange, then there is shortfall. For every shortfall, the Exchange levies penalty and this penalty will be debited to the ledger if the shortfall is not covered by you.

Hedge is a protection created for your trading in the event of market turning against your expectation. If you had a long position in Nifty you are un-hedged but if you buy a PUT Option simultaneously, you are then hedged. This is because, if market falls, the loss in Nifty long position will be limited as your PUT will start making money. This is called a hedge.

To encourage traders to take positions with due protection, SEBI has provided huge margin benefits to those who trade with hedge strategy. A hedged position can reduce your margin requirement as much as 70% or even more.

To ensure that you get margin benefit, you need to place the Buy Put first.

This is just an illustration and the reduced margin requirement could be even lower. This is the great benefit of Hedging.

Now coming back to scenarios when Margin shortfall arises, the margin requirement doesn’t change majorly as long as the hedge leg stays. The movement one of the hedged leg is removed, it shoots up. Here, if you close the Put option, then the margin requirement will shoot up from 49k to 1 lakh. This might even occur, if your Put option expires on the weekly expiry (provided you had taken a weekly expiry Put option) and have not created a fresh leg for hedging. In both these scenarios, your Nifty long position becomes un-hedged or unprotected and hence, the margin requirement shoots up. So, we suggest you to ensure that you have sufficient margin before you remove one of the hedged leg to avoid penalty or close both the legs simultaneously.

How is the Penalty Calculated?

If shortfall continues for more than 3 consecutive days, then penalty of 5% of the shortfall amount shall be levied for each day of continued shortfall beyond the 3rd day of shortfall.

If shortfall takes place for more than 5 days in a month, then penalty of 5% of the shortfall amount shall be levied for each day, during the month, beyond the 5th day of shortfall.

Will I be informed about the shortfall in margin ?

EOD shortfall is intimated by default via margin statement that is being emailed you on daily basis (as long as you have the position). If the shortfall occurs due to volatility in the market or due to removal one of the leg of the hedged position, in such case, it is difficult to provide online information about the shortfall. In such case, the clients are advised to take due note of the shortfall and ensure sufficient funds are available to avoid penalty.

Did you find it helpful? Yes No

Can you please tell us how we can improve this article?